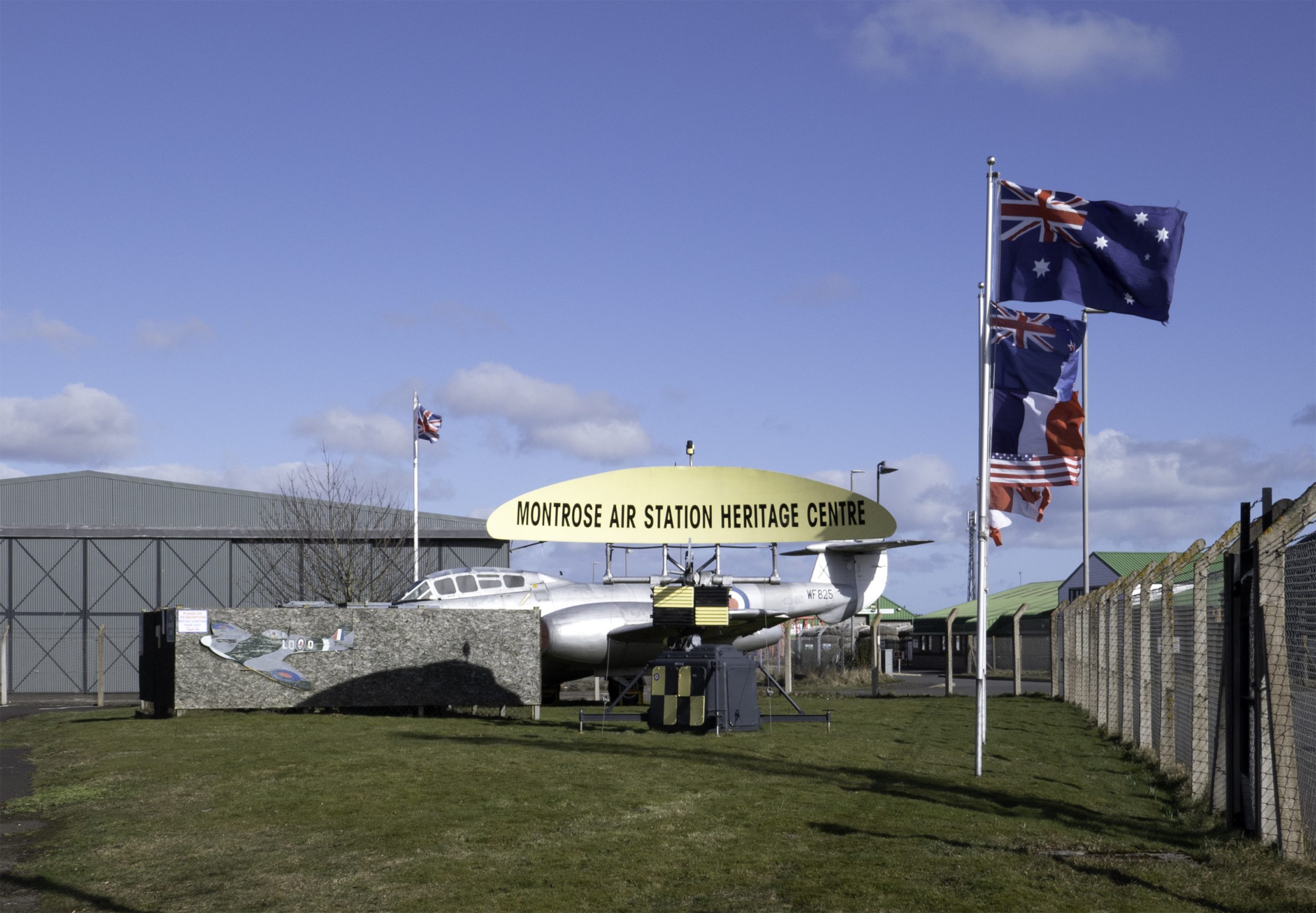 A new year, a birthday, an opportunity and a new start. AND, a new blog site!

March 2022 has possibly changed our lives. We’ve been looking for a new home for a year or two now and one came up on March 3rd, the only snag …… it’s in Scotland and we’re in South Wales. Those who are resident in or who have visited and driven in the UK will know that a 500 mile drive can be a challenge but, sometimes you gotta do what you gotta do. So, a long drive, a house viewing and an application completed, we spent the weekend with my sister and headed out to relax and explore the East coast, well, a bit of it.

First stop, Inverbervie to visit a wood shop. You know the sort. Everything either made in house or bought in and a little bit special, different and of course, expensive! No photos.

So a short drive back down the coast to Montrose where I get dropped off and the ladies go wander the town itself. 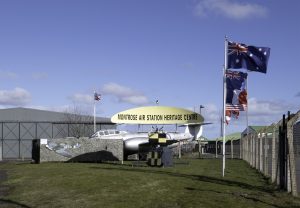 Lucky me, the sun is shining, no time limits and freedom to roam. The chap meeting and greeting turned out to be a fellow ex WAFU (maybe another post?) so, a quick chat, purchase a ticket and off I go.

This was Great Britain’s first ever operational military air station, 1913, amazing there’s anything left at all but, there is, apart from the gathered exhibits.

First stop, the Burke’s Shed, singular, there are four of them on site but only one currently used by the centre. These were built towards the end of 1913 to house the first aircraft and I am amazed that they still exist. 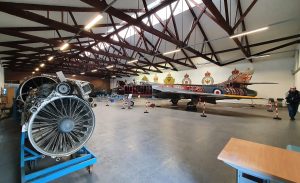 An ex RAF chap told me all about the hangar and the WW2 hangar across the road, still there!!! Amazing. One of the staff painted all the original squadron badges on the wall and they look fabulous.

A wander back to the main display area, in glorious but freezing sunshine, it is Scotland and it is March! 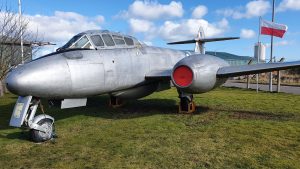 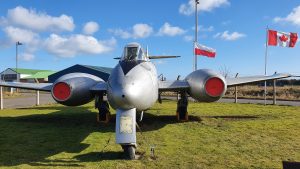 For a small island with a hugely rich aviation heritage, we don’t have any one central museum that retains all our historic aircraft, so drifting around the entire country is often the only way to see some of them.

Directly in front of the Meteor is the HQ building and Red Lichtie, a Spitfire replica. What a wonderful aircraft to see, hear and watch in flight. 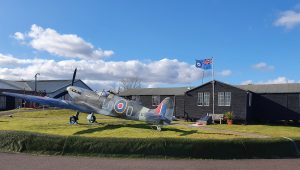 A wander through the HQ building brings back the nostalgia of squadron buildings, slightly more concrete involved in my day of course 🙂

I’d been advised of the best route to follow today, mainly due to a gaggle of Cub Scouts on a tour of the site and it was about now that I stumbled on them and had to take evasive action, making the route up as noise dictated. 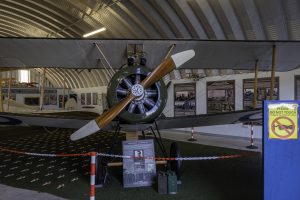 The Lt John Ross Robertson Building has two replica WW1 aircraft stored inside. Amazing to stand next to these and imagine the souls that flew and fought in them, open to the elements and in early days without even a seatbelt! The ground between the aircraft is studded with memorial poppies and crosses, our WW1 heroes often forgotten. 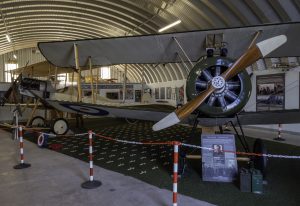 Sopwith and BE 2a

I read an article about the first flights from the South coast of England up to Montrose, unbelievable these days, have a read. Flight to Montrose 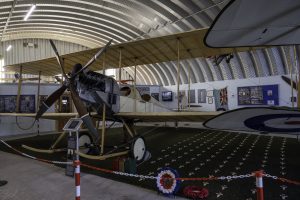 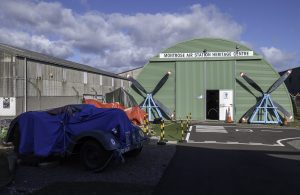 The David Butler building was the last I could get into for the moment, a couple still shut for upgrade work or due to the virus situation. 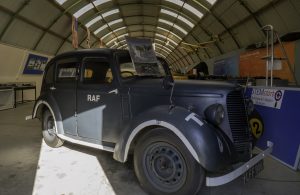 As an ex Fleet Air Arm chap, it was a nice surprise to see a T22 Sea Vampire, especially on an RAF site 😉 These had long gone by my time but I used to see all sorts of aircraft as a young lad in Lossiemouth, home of HMS Fulmar for many years, RNAS Lossiemouth. 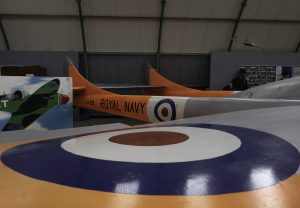 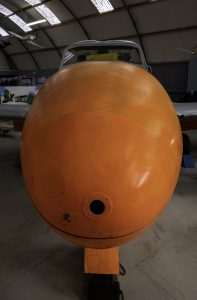 De Havilland were one of our best known aircraft manufacturers, sadly most of whom have now faded into history. The Venom and Vampire were ….. different.

Sea variants of many aircraft were the Royal Navy or Fleet Air Arm versions of standard aircraft, adapted for deck landings, having an arrestor hook and strengthened landing gear to cope with those deck landings.

I had a great couple of hours wandering the site, taking photos and avoiding little people, so glad I had the opportunity to visit. The history of the site is fascinating and, as I said before, I find it amazing that any of it still exists today.

And so, as a parting shot from my first ShotsBlog, a model view of the site in its heyday, the Burkes sheds and HQ buildings still there for all to see. Amazing. 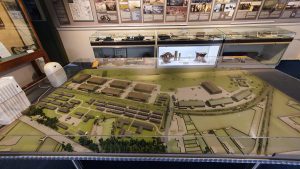 But, I can’t possibly leave without adding a few more of that Spitfire replica. 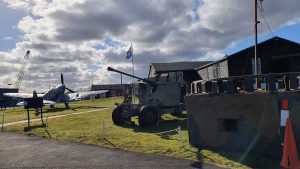 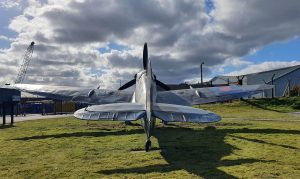 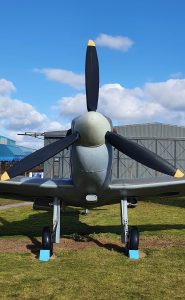