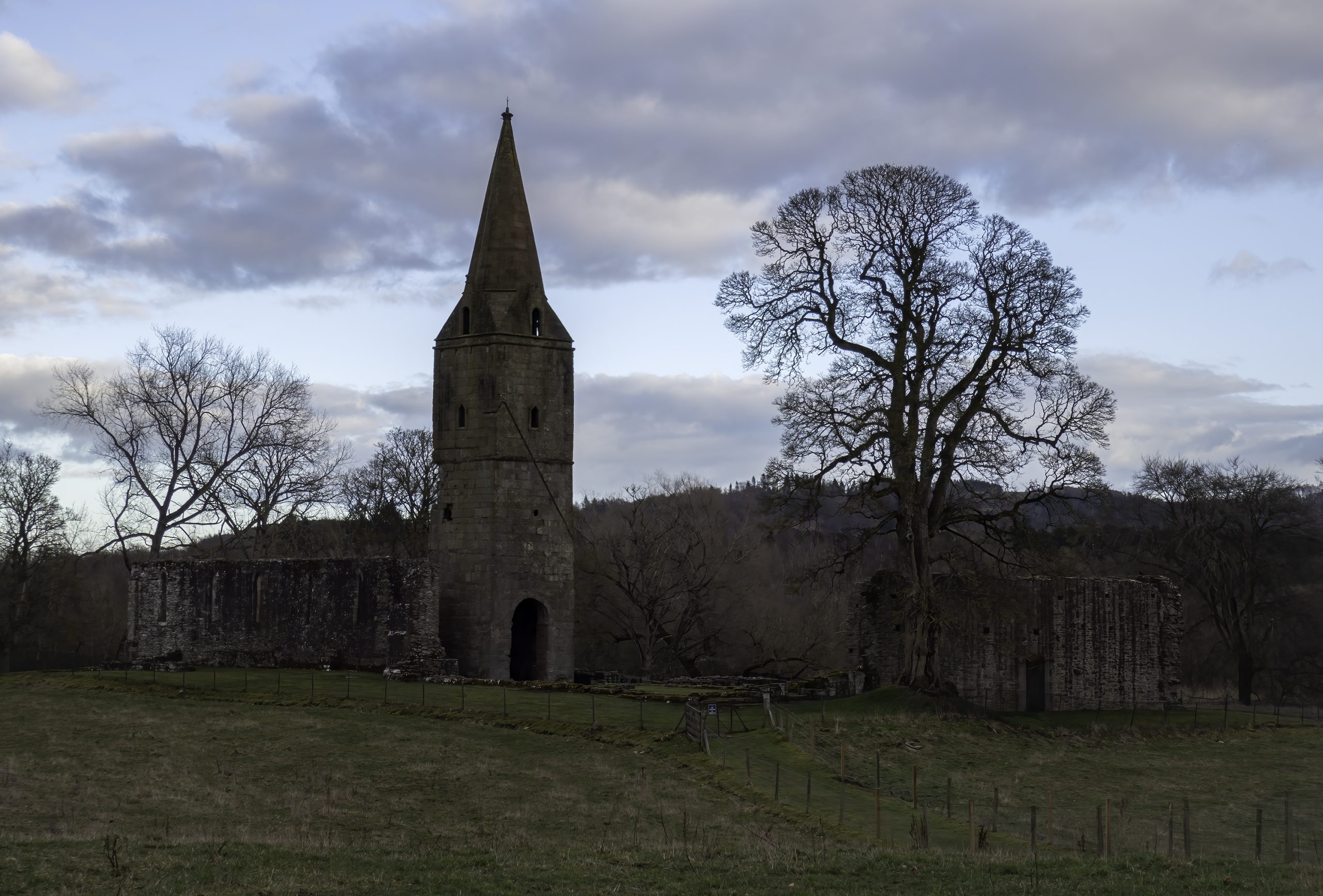 Later that same day, as we headed for home, well, my sister’s house, the sun was going down, the light was still good and I’d always wanted to stop off at Restenneth priory, it is on the way, isn’t it? 😉

I’ve been researching this ancient site for a few days now and, it seems, no-one wants to publish a full set of information. As ever, our own historic agencies seem to be either squabbling over it  or disinterested, such a shame. 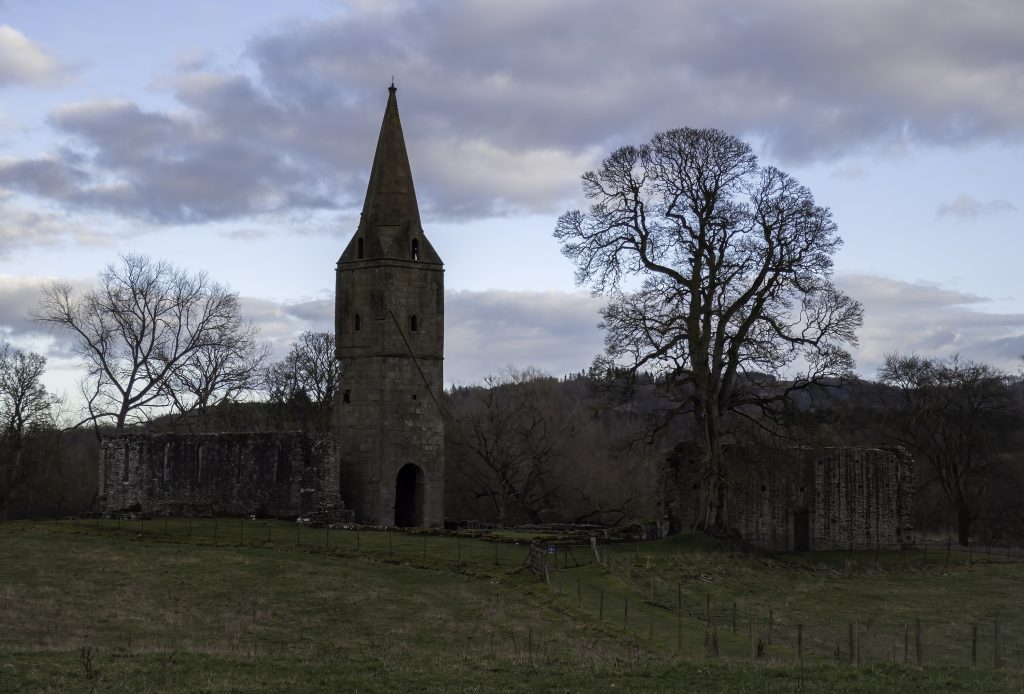 There may have been a Pictish church on this site as far back as 710! I’ve now stumbled upon a few sites with information about the Picts, I really ought to find out more. Wikipedia  seems to have the most detailed information about the site, which is no bad thing, other than it is supported by us only! There are a few interesting artefacts on the site, which I will share but, I could find out very little about them 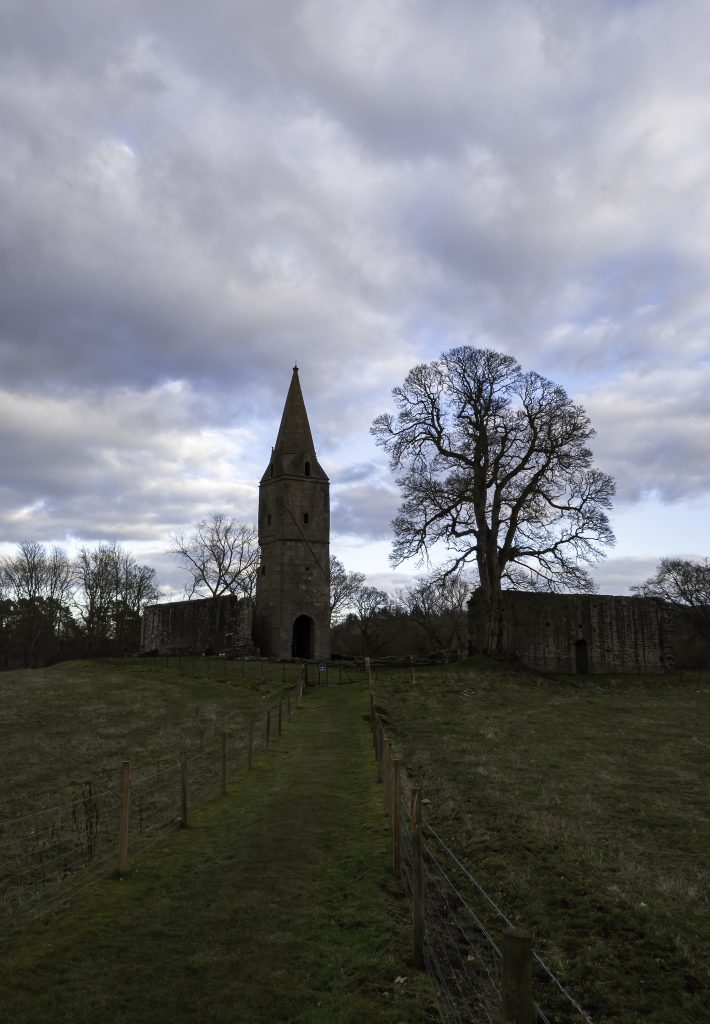 Walking up to Restenneth

The old tree at the front of the buildings made for a beautiful silhouette.

The priory is situated just off the road out of Forfar, tucked behind trees so unless you are paying attention to the single sign, or happen to notice the spire in the trees, it is easily missed. There’s a wonderful peaceful atmosphere here, I’d love to come back on a cloudless night and try some astro shots. There is a sign at the entrance that states No entry after dark 🙁

A field surrounds the priory site now and it is currently occupied by Nelly and Nate, a beautiful pair of Galloway belted cows 🙂 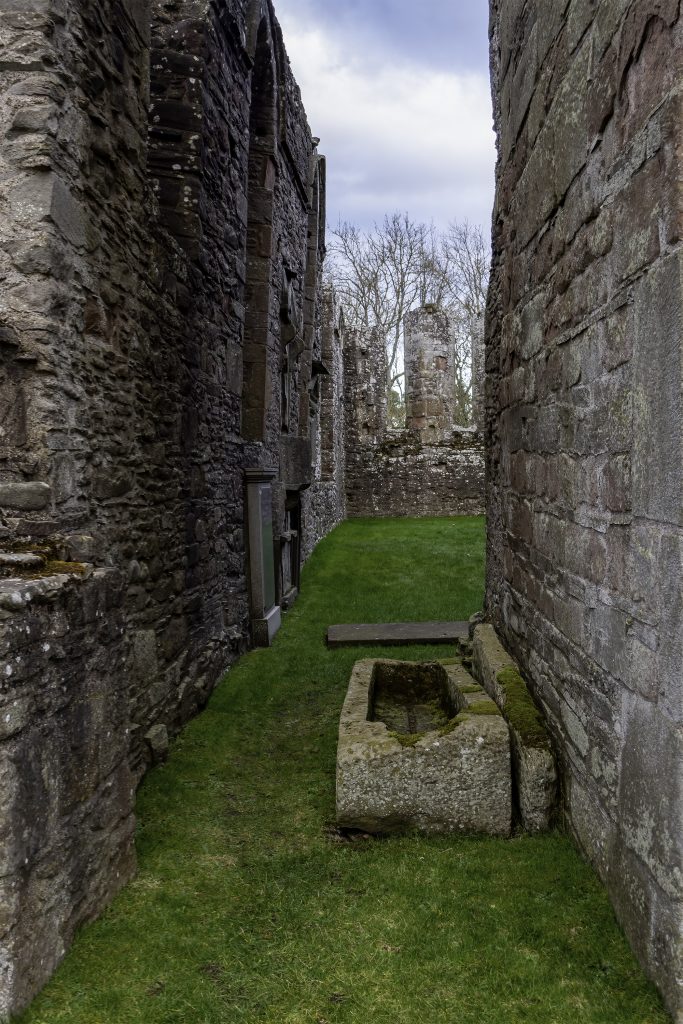 Sarcophagus inside the main area

I mentioned a lack of information, this sarcophagus is wonderful but, I saw nothing to explain it. 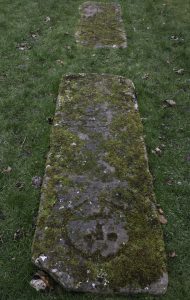 Smiley face on a grave stone 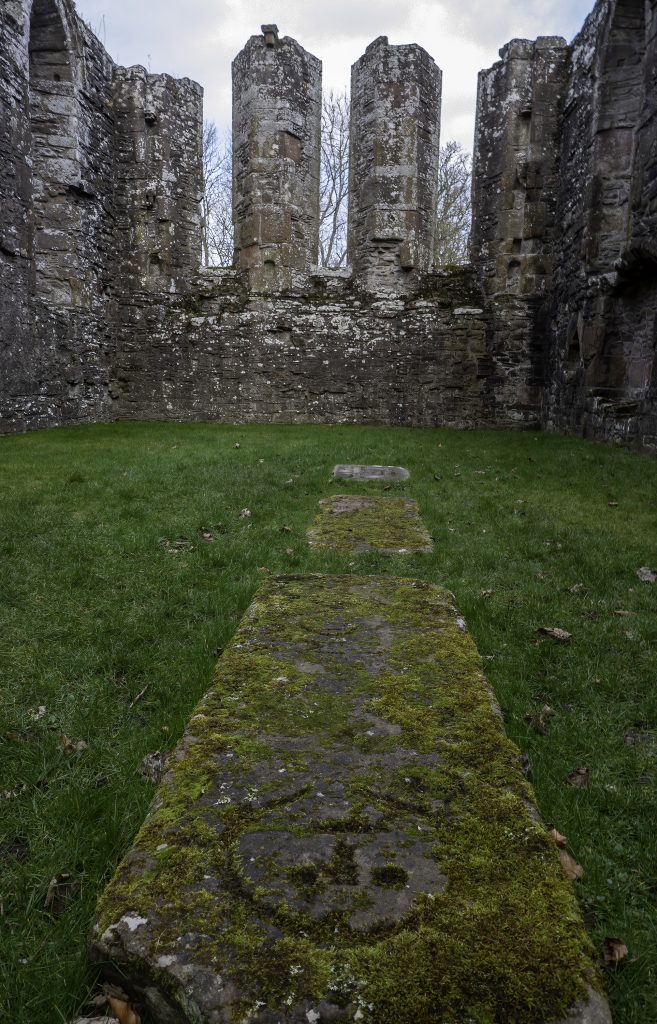 Three flat stones lie down the centre of the main building, there are often graves in the floor of our cathedrals and churches but, the smiley face on this one intrigued me. I’ve looked through many sites covering grave markers but none mention this. Is it graffiti or deliberate? 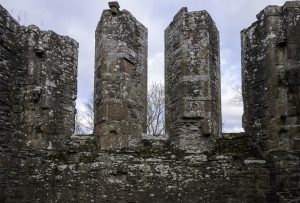 There aren’t many windows left, in fact, apart from this main central area, there’s not much left at all. 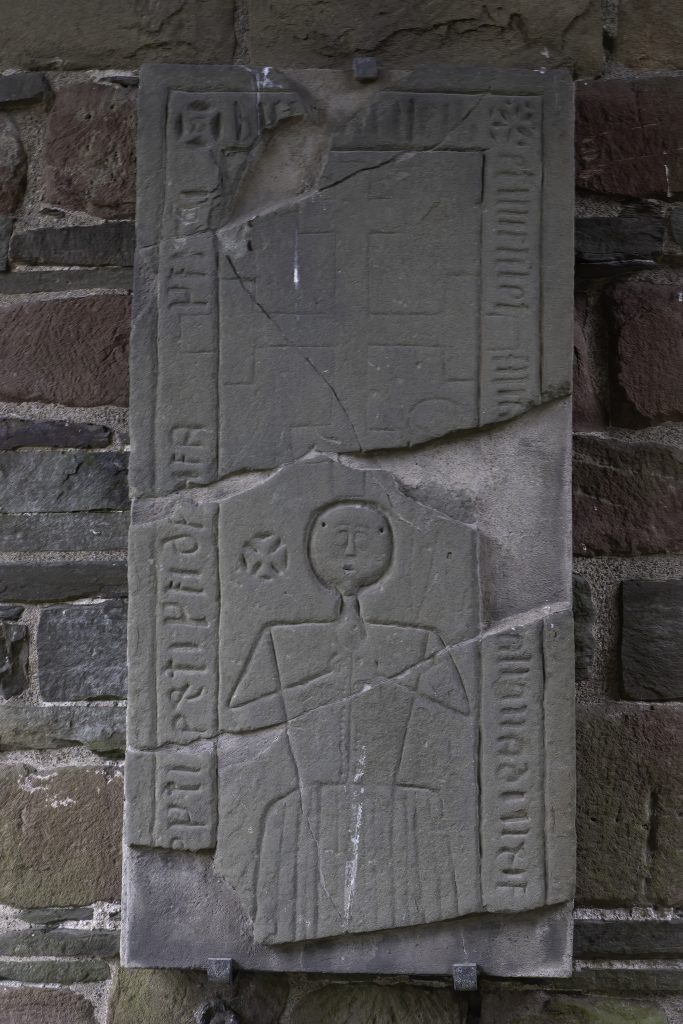 This engraved stone is mounted on the wall within the entrance arch. Who was it? 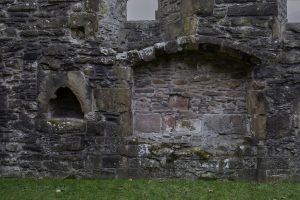 There may have been a family stone in this main arch? The small neuk for a candle, tributes? 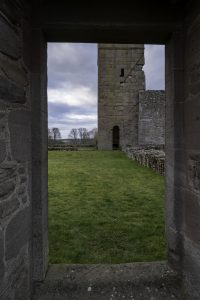 View through a window frame 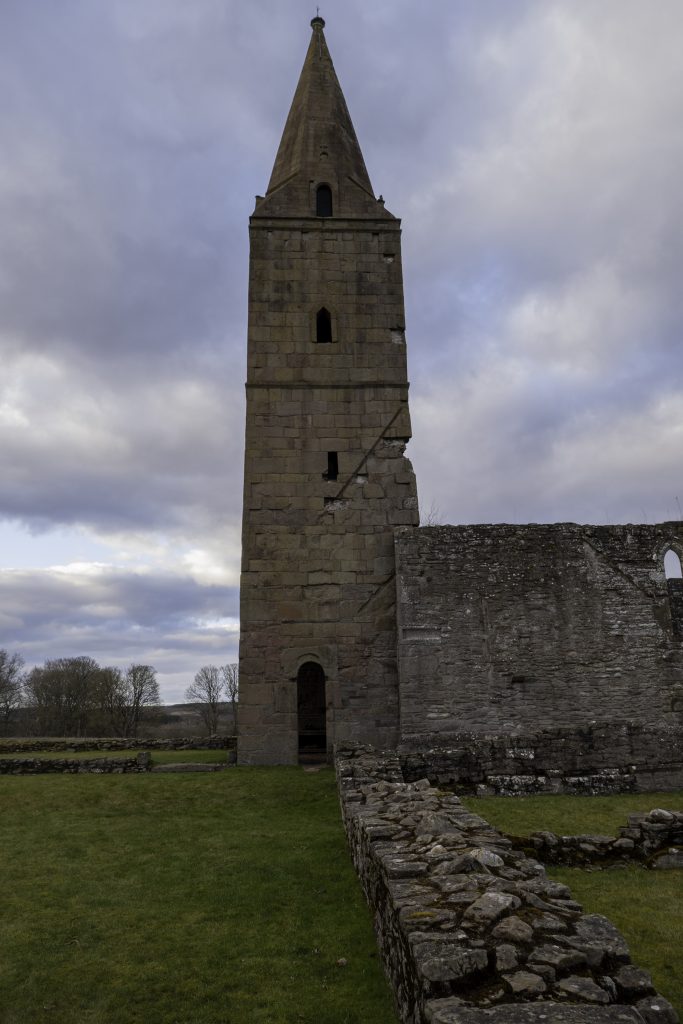 Lines to the tower

Given how little of the rest of the building still remains, it’s a wonder that the main spire is still intact. I love the markings where other roofs would have met the tower walls. 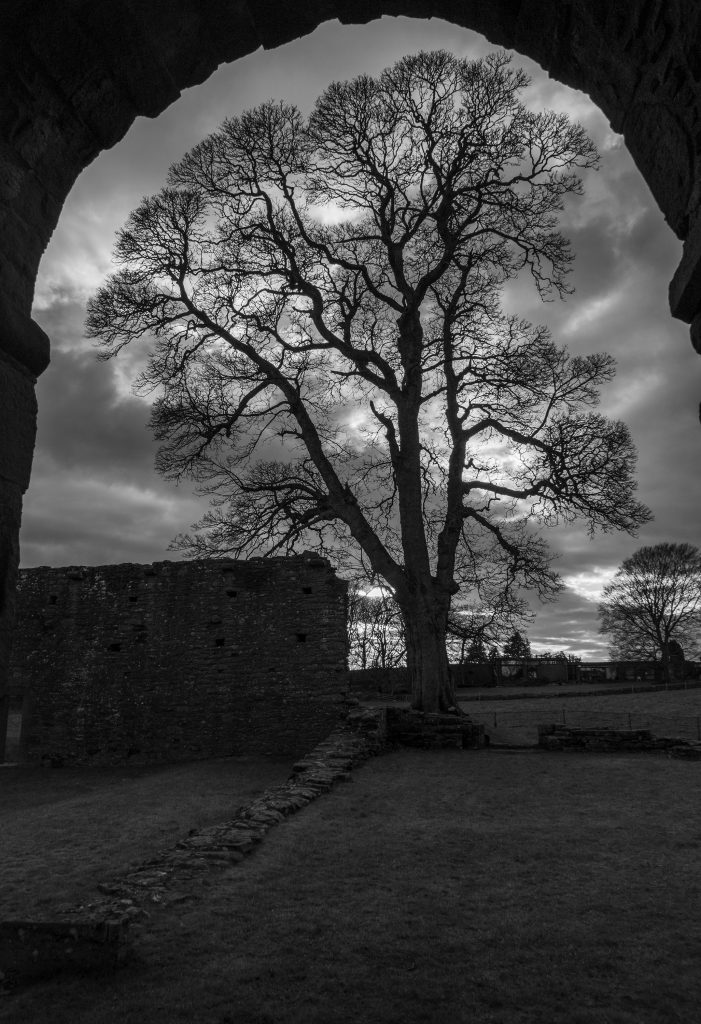 Tree framed in the arch BnW

I did love the silhouette of this tree as the sun went down. I think I must revisit this site. If this tree is hundreds of years old …….

This was a very peaceful end to a fabulous day out, many more to come I hope. All shots with the Lumix again.